Which one would you buy? 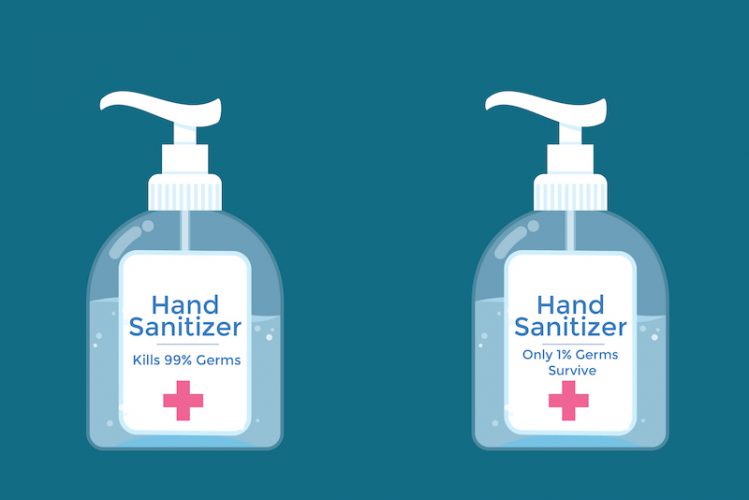 A minor label change makes one of these a much better choice to buyers.

This is because of the Framing Bias or Framing Effect.

The framing effect is a cognitive bias that causes people’s decisions to be influenced by the way in which information is presented or conveyed. Depending on what aspects are highlighted, equivalent information can be viewed as more attractive or less attractive.

Simply, we tend to judge information based on how it is presented (framed)instead of hard facts. Marketers use this to distinguish their product from competition.

Understanding and making use of this is helpful to sales leaders and managers too.

The Framing Effect in Sales Teams

And let’s face it, we all assume that with more data we get, the more we will improve. After all, knowing is everything right? Wrong!

Contrary to popular belief, more information rarely translates into more action on the field. For example, if you look at three different types of team members – the top 10%, the bottom 10% and the balance 60%. Now does a top performer need the same level of information as the other two? This is like telling a person who doesn’t exercise the distance in a marathon and hoping to get them motivated to start running. So how does a dashboard with shows a 50% achiever they are halfway away from their goal, motivate them to do better or how does the same dashboard help a 100% achiever push more for hitting their goals?

This is where the framing can help.

Effective leaders use framing to assess, contextualize their performance data and set up personalized, achievable and ambitious goals.

In a way, it is making your data more contextual to each individual based on where they are on their journey and help them get motivated to perform better.

How Framing can help set better goals for your teams

Goal framing is basically about how you “frame” information in a way to help people process information and act on it. Here are 4 distinct and effective ways you can frame goals for your sales reps to help them process their data and act on it –

Achieved vs. left to achieve

Goals can be framed in terms of what has already been accomplished versus what is left to accomplish. Each one has a unique effect. Marathon runners, for instance, get motivated when they know that they’ve got just a few miles more to finish the race. It’s called the goal gradient effect. Conversely, for some it helps see how much they have accomplished.

Sales leaders can frame their team goals and messaging depending on each rep’s individual capacity for competing and their position in their own performance journey.

Information can be framed using its positive aspects or by focussing on the negative – each has a different effect.

For instance, studies show that negative framing can lead to more ambitious goal-setting. Telling a sales rep they have been consistent for 20 days out of 30 will have a different effect than telling them they have been inconsistent for 10 days in the month. In this case, the negative framing can lead to more ambitious goal setting due to our preference for avoiding losses (loss aversion – another bias, for another time!).

However, when it comes to comparing performance against a benchmark (performing better or worse than benchmark), reps respond better to the positive framing. [worxogo behavior labs conducted a joint study with Stanford’s Professor Szu-chi Huang on this phenomenon and how it impacts performance – reach out to us for an overview of some of the findings.]

Performance can be compared to an individual’s past performance/track record or their team’s current performance. Depending on the context and individual preference, they will have a different effect.

Studies show that individuals are more likely to take up new behaviors (hotel guests reusing their towels) when they see that others do the same (75% of guests at this hotel reuse their towels to save water).

In the context of performance, how a person reacts to the comparison also depends on their individual preference for competition (compete with self vs compete with others).

Timing of the goal setting and articulation based on where in the performance journey the individual is matters. Informing a rep about a missed target at the end of the month is one way to go. But that rarely helps in motivating the rep to improve starting next month. Helping the rep during the month in a consistent way and customizing the feedback based on the time of the month is a better way. For example, telling a sales rep how they’re consistent in the middle of the month and need to accelerate in the last few days is a better than just talking about what % of target has been achieved.

Framing, when used appropriately and personalized for each individual’s context can boost intrinsic motivation and performance.

In all teams, leaders and managers can know their team intimately and personalize goals on an on-going basis for each rep. For large sales teams, this may be harder to accomplish. Using a behavior-based AI coach like worxogo Nudge Coach, leaders of large sales teams can give the same kind of individual attention to each sales reps and witness widespread and sustainable improvement in performance.

Click Get a Demo to see how worxogo Nudge Coach can frame personalized goals for your entire sales team and coach them to improve their performance by 20%.